…or more commonly known in my mother tounge as Ginisang munggo. My mom often serves this along with fish or pork chop, if not she would include bits of pork. I prefer putting shrimp with it to maximize iron content, this is something I cook for my asthmatic son. I think I’ve featured this dish here and on my other foodblog often enough but today I’m plating this quite differently. 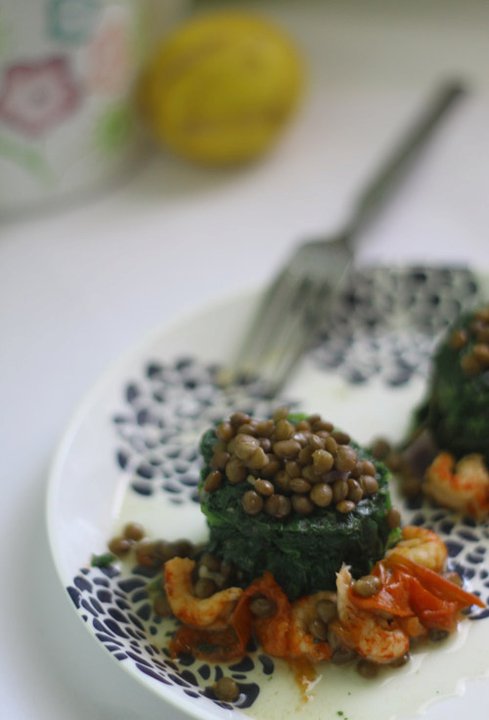 1. Boil the lentils/mung beans in a large cooking pot or pressure cooker. While waiting for them to tenderize; mince garlic and ginger, cut onions and tomatoes.

2. In a separate pan, saute garlic, onions and ginger. Throw in the tomatoes when the onions become transparent. Put the shrimps next. Season with fish sauce (or salt) and pepper. Set aside.

3. When the mung beans are tender enough, put in the pan contents together in the pot. Add a little water and season according to taste. Add the spinach on top and let cook on the still hot-turned-off- stove. =D

Best served with fried fish! (Another iron-rich food.) I learned that spinach contains inhibitors that will be difficult for the body to absorb iron, so I tend to remove it for my son’s portion. The tomatoes on the other hand contains lots of vitamin C, that which help iron absorption.

(Disclaimer: This dish will not cure bronchitis or asthma, but it will help people with iron-deficiency thereby strenghtening the immune system.)